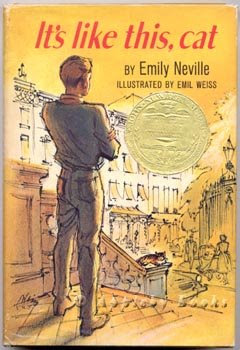 It's Like This, Cat is a the perfect title for this book. Because I think that what it does best is describe a time and a place - neighborhoods in New York City in the early 1960's. A lot of the Newbery winners do excel in capturing particular settings, come to think about it. Maybe I've come to expect that as a given, and that's why I didn't like this book more than I did, which was moderately.

It's interesting, too, because Neville gets the feel of it down (I think pretty well, though I don't know the setting myself) without mentioning current political events or too much of the pop culture of the time. It reminded me of Betsy Byars' Summer of the Swans in that way - except instead of a girl and her tennis shoes and backyards and Green Acres, Neville shows us a boy with his duck tail (which gets turned into a "butch" cut) and apartment buildings with stoops and cellars full of storage lockers, and record players with needles and Belafonte records. Young teenagers ride their bikes everywhere and explore the city by themselves, calling their parents (even if their parents are beatniks) at dinnertime if they're going to be late.

Apart from the setting, the story is a quiet coming-of-age story of a young teenaged boy (unnamed for a few chapters, but you finally learn he's called Dave) who befriends a number of different characters in his neighborhood. One of the more eccentric ones, whom the local kids call Crazy Kate the Cat Woman, gives Dave a young tomcat. Dave is a rather lonely kid - he has no siblings, and he fights with father - and his adventures with Cat lead him to some new perspectives on his family and new friends.

It was all very nice, and I enjoyed reading it, but it didn't really make the profound impression on me that I feel like a Newbery winner should make. Am I expecting too much? Do I really need more "issues" in a story? Is it weird that my main thought after finishing It's Like This, Cat is on the lack of drug use in the big city?

I did find the whole book, including illustrations, online at the University of Pennsylvania's digital library. Take a look at it and see what you think.
Posted by Sandy D. at 9:27 AM

Duh - that was me in the deleted comment above - should have just edited it! I meant to say that I was surprised that the copyright was not renewed on this book, especially with it being a not-that-old Newbery winner.

This has been one of my favorite books on the Newberry list so far. It was fresh and interesting...I was surprised to be 'sucked in' as much as I was. It was fun to read these reviews as no one I know has ever read this!
Zana

At the Celebration of Women Writers at http://digital.library.upenn.edu/women/_collections/newbery/newbery.html we are trying to republish all the Newberys by women that are in the public domain.

i have to read a newbery book for a book report and , i saw this on the list my teacher gave me . i thought the title was interesting so i thought i would see what's it about. now i think i'm going to choose it!

I adored this book when I first read it in the early 70s, and forty years later, my affection for it is unchanged. You are right that it eloquently captures the "feel" of a time and place perfectly (in this case, NYC in the 60s) but I disagree in the cavalier dismissal of this achievement. Really, there is no higher praise that can be given to a writer than to tell him he nailed it. The story evokes a world astonishingly different yet maddeningly unchanged, which after all, really is what life is all about. Imagine a 14 year old kid spontaneously popping into a Broadway musical today! He'd have to access to about $75, even for a TKTS ticket. Yet that DESIRE to DO something fun, different, spur-of-the-moment, with someone relatively unknown, but who might-just-be-the-one is an experience that transcends Time and Place. Read this book, lose yourself in the world of someone else, and take comfort in the continuity of life.