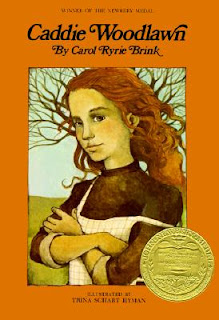 I did love this book during my tween years, and now rereading it as an adult, all I can think of is how very much like the Little House books it is. But this story takes place at least 15 years before Laura Ingalls Wilder's birth. And interestingly enough, I counted at least two stories in this book that I also remember having read in the Little House series. I think perhaps they simply became Wisconsin urban legend. I did my google maps homework and found that Laura was born less than 40 miles from where this book takes place, which explains the common themes- Caddie Woodlawn is based on the true story of the author's grandmother.

Caddie takes place during the Civil War. Caddie's father, who runs the local mill, is affluent enough that he was able to pay to have a man sent in his place. The family also has hired men living full-time on the property. Caddie is the middle child of five. There used to be six, however, when the family moved west from Boston the youngest girl, Mary, was ill and died. Because Caddie was weak and sickly also, Mr. Woodlawn convinced his wife to allow her to run wild with the boys to regain her health, convinced that she would take up more feminine behavior when she became ready.

In addition to their own small family, the Woodlawns are on very good terms with the Indians that live locally, especially Indian John (who has the advantage of command of the English language, although it's unfortunately depicted as the stereotypical pidgin English common in books from this period). The book follows a year in Caddie's life- picking nuts, riding horses, going to school, and worrying about rumors of Indian massacre, eagerly awaiting the mail after a long winter, and eating entirely too much turkey. Over the course of events, Caddie does mature and become ready to at least consider that a lady's skills have some merit. 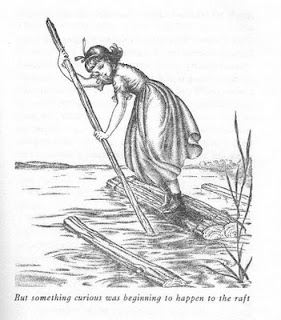 Also impressive for the time the book was written in is the way the Woodlawn family is scornful of a man in the community who had taken an Indian wife in the days when the town was not yet settled. Not because he took an Indian wife, but because he is clearly ashamed of her and their three children, and because he sends his wife away to rejoin her people when rumors of massacre have made her uncomfortable to keep. Stereotypes notwithstanding, it's a perspective that you don't often see represented. As their mother tells the Woodlawn children, "Sam Hankinson hasn't a very strong character. Now if your father had married an Indian. . . you may be sure that he would never have sent her off because he was ashamed of her."

I did love my paperback copy of this book with Trina Schart Hyman illustrations; they have so much more character than the airbrushed bland ones that are in the 1958 edition I borrowed from my library this week (see right). Who makes a better-looking tomboy, I ask you?

Cross-posted from http://oldnewberries.blogspot.com/ in which Melanie and Sue have made it a personal mission to read all Newbery Award and Honor books.
Posted by Melanie at 9:41 AM 12 comments: