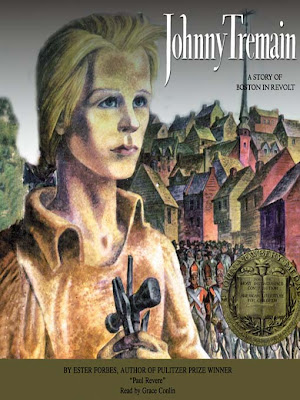 Here are some of the things I liked about Esther Forbes' 1944 Newbery winner, Johnny Tremain. The historical characters - stocky, practical Paul Revere, proud businessman John Hancock, and Samuel Adams with his shabby house - are all portrayed in an interesting and not overly simplistic way. They're real, complicated characters, not icons of the Revolution.

The colonial setting is also very well drawn, and Forbes has included many details about life in the late 18th century - especially food (syllabub! salt alewives, apple, mince, pumpkin and plum tarts, squabs, "a wreath of jellied eels" and "tipsy parson - white bread tied into little knots, buttered and baked", p. 58-59), and the apprentices' work, and a bit about the Puritans' religious strictures, and the general feel of the busy wharves of Boston. In addition to the silversmiths (Johnny starts out as an apprentice silversmith), there are also clockmakers, wool weavers, barbers, butchers, tailors, bookbinders, instrument-makers, printers, delivery boys (or "horse boys", which Johnny becomes, with some wonderful descriptions of his horse, Goblin), as well as chimney sweeps, oystermen, and knife-grinders. Boston and its hinterland of smaller towns and farms really is shown in a historically accurate (as far as I can tell) and colorful manner.

I did not like the cover. Peter D. Sieruta blogged about the different Johnny Tremain covers (some with Johnny in a tricornered hat and some without), but I have to say that this is one of the few Newbery winners where I think that recent covers are actually an improvement over the original. Seriously, Johnny's pale, ghostly face and the lines of redcoats and huddled houses made it harder for me to pick the book up and start reading it than it should have been. I did like the black & white illustrations every few chapters, though they weren't especially memorable.

Johnny himself is an interesting but often not very likable character, starting out with his thoughtless name-calling ("pig-of-a-louse"!), and his bullying of the "whitish, flaccid, parasitic Dove" (p. 3). He doesn't treat the women in his life very well, either, taking them for granted, pulling away from Cilla when she needs him, and then only getting interested in her when it appears she might be involved with his friend Rab.

Johnny does carry the story, though, and this is true partially because of his flaws. He does mature, and I liked how he thought better of his dead mother and the sacrifices she made as the story developed. His understanding of his own personal shortcomings and his increasing knowledge of politics and subsequent patriotism are also heartening to read about.

Paragraphs like the following infodump, however, reminded me a bit too much of the history I didn't like reading in high school (it wasn't until I got to college that I realized that I really loved history, and that it is full of the most bizarre and amazing stories that you couldn't make up):

The tension in Boston grew. Everyone knew that with the coming of spring General Gage would leave the safety of Boston, strike out into the country as commanded by his King, and this time in considerable force. He would never dare send out a mere handful. He knew how well the provincials were arming, preparing to welcome him. King George was in a fury over the dilatory, cautious behavior of his general. Rebellion had not been put down as he had ordered and every day it was growing stronger.....Word came to Boston that three generals, more ferocious than mild General Gage, were already on the way over to take command - Generals Howe, Clinton, and Burgoyne. Doubtless, perhaps against his better judgment, Gage would make his big sortie before the Cerebus arrived with the three new generals (p. 197-198).

Luckily, paragraphs like this didn't constitute the majority of Johnny Tremain's story, but they were frequent enough to make me sigh and wish for a little more showing and less telling. This is probably why a lot of kids today also dismiss Johnny Tremain as boring and old-fashioned. Which is a shame, since the story is really rather compelling, and I can think of loads of good discussion questions for kids (or adults!). You could look at how Johnny deals with his disability, what it means "that a man can stand up", and how different things were for 14-16 year old boys in the late 18th century, for instance. And why did Johnny became a Whig, and whatever happened to Dove? And Cilla and Isannah?
Posted by Sandy D. at 5:08 PM 1 comment:

Secret of the Andes 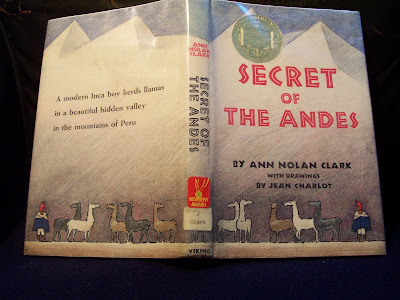 Secret of the Andes, by Ann Nolan Clark, is a short and rather heavy-handedly poetic story about a boy named Cusi, who lives in an isolated mountain valley, tending a flock of llamas with an older man. The story follows Cusi as he learns about life outside the valley and subsequently discovers why he lives there alone with Chuto.

So - a few things I liked about Secret of the Andes. It's relatively short, and I did like Clark's language sometimes, especially when she describes sunrise and spirituality in the mountains:

Chuto was a dark shadow moving the gray shadows. Cusi followed him swiftly lest he become lost in the earth clouds that billowed around them (p. 19).

Earth clouds! What a great description of fog.

Then the sun came. Chuto's voice rose to meet the sun, and Cusi knew forever the joy of welcoming the coming of the Great Father who lightened and warmed the world.

After the call was finished Chuto stood for a minute with head bowed, lost in thinking. For a brief time he had touched the Spirit World, and he hated to return to the realness of living. But it was only for a moment. With a sigh the old man raised his head, straightened his thin shoulders, and turned to the homeward trail (p. 36).

Furthermore, I have a fondness for descriptions of food in books (what can I say? I studied ethnobotany for several years), and I really enjoyed the parts about traditional Andean coca use, the frozen (actually freeze-dried) potatoes that Cusi grinds up, chicha (Clark missed a wonderful chance to describe how it's made with saliva), and the obscure grains - canihua (which is related to the better known quinoa) and "pigweed" (which may be amaranth [kawicha], or canihua or quinoa) - and of course the "guinea pigs and sweet potatoes" that Cusi eats a couple of times.

I didn't like the rather plodding plot of Secret of the Andes as much. I didn't care much about the heavily foreshadowed secret, and the emphasis on pure, royal Inca blood annoyed me - not to mention that these elements precluded any kind of normal family life for Cusi (one of the major sources of conflict in the story). The characters were all rather stoic and flat, and I didn't appreciate the pseudo-profound statements about following your heart, not grieving if your searching circles (no, I didn't mean you're, it's about searching in circles), and the like. I did rather enjoy Cusi's quasi-mystical relationship with the llamas, though I got a little tired of hearing how haughty and graceful they were.

In a lot of ways, Cusi's story reminded me of ...And Now, Miguel, which won the Newbery the following year (1954) - both are slow (if not ponderous), thoughtful stories about a boy's coming of age, with a lot of ethnographic detail. Is it possible that a lot of the same committee members were still there a year later?

When I went looking for the cover of the 1963 edition that I have checked out of my library, I couldn't find it online. So above you see a photo that I took (hopefully my local librarians won't hunt me down for putting the open book face down to get a shot of the wrap-around effect of the dust jacket).

Although I'm not a huge fan of illustrator Jean Charlot (and he illustrated ....And Now, Miguel, too! how interesting), I think his cover and the endpapers (seen here in a photo taken from Peter D. Sieruta's wonderful post on Secret of the Andes) fit the book very well. Much better than the modern adaptations. Why the heck do publishers keep slapping new cover illustrations on these classics? 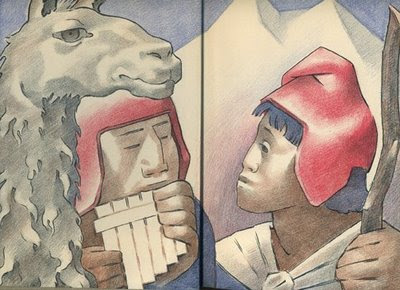 Peter D. Sieruta's post also led me to an absorbing online discussion of The Secret of the Andes at the Heavy Medal blog, and how Secret compares to the Newbery Honors books of 1953 - especially Charlotte's Web, by E.B. White. I don't think anyone can deny that Charlotte's Web is the more widely read and loved book today. But is Secret of the Andes actually a better book? Be sure and read the comments, they're quite enlightening. 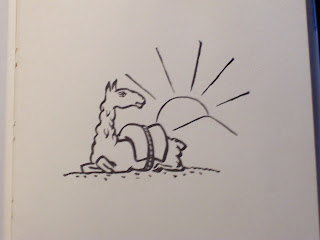