Waterless mountain by Laura Adams Armer, is the story of a young navaho boy Hayolkai aski but called younger brother. He wants to be a medecine man like his uncle and it tells the story from when he was a young boy to becoming a man.

Laura Adams Armer made friends with the navaho people and learned a lot about their beliefs, custums, and culture.

Younger brother decides he needs to go on a trip and search for the ancient turqoise woman and makes a long journey from his home in Arizona to the pacific ocean.
Younger brother has many experiences along the way and meets many friends and enemies.

There are a lot of old native american stories told throughout the book that are kind of interesting.

This book goes into the thoughts of younger brother and tells of the way many Navaho people think.
Posted by josh at 3:44 PM No comments: 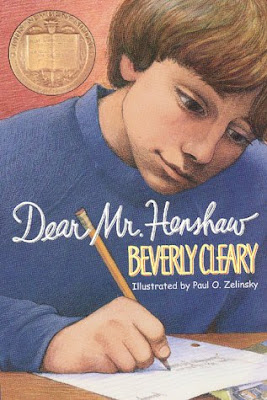 Dear Mr. Henshaw, by Beverly Cleary, was so much better (and shorter!) than I expected. Why didn't anyone tell me what a sweet book this is?

I'm not a huge Beverly Cleary fan, mainly because I'm not terribly familiar with her books. I somehow missed her stories as a child (my parents and grandmothers tended to give me classic books as gifts, and I never stumbled across Ramona or Henry Huggins on my own). When Dear Mr. Henshaw won the Newbery in 1984, I was in college, and not paying a whole lot of attention to children's books. But I'm trying to make up for lost time now. ;-)

The title didn't instantly draw me to this book, nor did the cover. The reviews and summaries didn't really grab my interest, either - an epistolary story (ho hum) about a boy whose parents divorce (sounds depressing). I don't usually like heavy-handed "serious topic affecting youth today" kinds of kid's books.

But I was wrong (except about the cover, I still don't like the cover, or the illustrations all that much). This book was funny, not at all heavy-handed, and the format - of letters to Mr. Henshaw and diary excerpts - was perfect. Both Leigh's and Mr. Henshaw's "voices" (although you only get Mr. Henshaw's words as they are reflected by Leigh, but that's enough) were wonderful. The portrayal of the divorced parents was so skilfully done that I wondered whom Cleary modeled it on.

Sometimes it's good to be so far off the mark when it comes to judging a book by its cover and blurbs. Now what I'd really like is another book by Beverly Cleary featuring Boyd Henshaw (with maybe a few reflected notes from a teenaged Leigh?). He just sounds like someone I'd like to hear more about.
Posted by Sandy D. at 2:22 PM 2 comments:

The Cat Who Went To Heaven

This very short book written by Elizabeth Coatsworth took me a little less than an hour to carefully read. The book is set in Japan and talks of an artist struggling to sell his paintings. One day his housekeeper brings him a cat. At first the artist is very angry at the housekeeper for bringing the cat because they are considered unlucky and even evil.
A priest comes to the artists house and tells him that he is the chosen one to paint a picture of the Buddha's death which if accepted would be hung in the temple. The artist spends the next several days living the life of buddha in his mind. He paints the buddha and then all the animals that visit him at his death. Each time he paints an animal the cat comes and looks at the painting with a longing to be in it.
The artist is torn between painting the cat or leaving it out of the picture because of their bad reputation. The ending was pretty neat when the cat was finally accepted.
I liked the brief description of the life of Siddhartha and the many animals he took the form of along with the short stories of them. There are also eight songs which the housekeeper sings that are kind of cool.
This book was probably not a favorite but it wasn't bad. I think it had a deeper meaning to it than I picked up on. I think children could be taught a little about the buddha by it.
Posted by josh at 9:35 PM No comments:

Labels: The Cat Who Went to Heaven

Hitty Her first hundred years by Rachel field is a story about the world from a doll's prespective. This book did not sound very interesting to me when I looked over the cover but I have to say it surprised me. This was the first book I have ever read about a doll and I actually enjoyed it even thought I have seen many low reviews on it compared to the other newbery book winners.
Hitty was a very special doll of her time. She was slightly smaller and wooden unlike a lot of china dolls that were popular during the time. She was made of mountain ash wood which is said to bring good luck, and you can tell that it generally did throughout the story.
The book is set somewhere in the early nineteenth century and tells of the first hundred years of her life into the early twentieth century. Hitty has many adventures and travels from her native state of Maine to many parts of the world and the United States. She is a doll that many people come to love and she goes through many owners and occupations including a snake charmer in India, a doll of fashion, a model for photography and even a pincushion. She gets to see much of the natural world and is even worshipped as a heathen idol.
I like that the book talks a little bit about what was going on during the nineteenth century including slavery and what life was like in the northern and southern parts of the United States during the Civil War.
Hitty meets many interesting and a few famous people along the way in her adventures including Adelina Patti( who I had never heard of but was a famous opera singer at the time) and Charles Dickens. She has seen the perspective of the world from many different people with different views and opinions and has been with people who treat her very kindly to people who are very cruel to her. She is owned by many girls with a variety of ways of life. She learns to accept critisism and compliments being that she is a doll of experience.
I think that most girls would really like this book and maybe even a few boys if they gave it a chance. For me it was a fast read and really easy.
Posted by josh at 6:20 PM No comments: