To see one's loved ones taken away, tortured and killed can turn anyone into a rebel. Daniel vowed revenge after his father and uncle were carted away and publicly executed by the forces occupying his country. He is then sold to a master blacksmith so cruel that Daniel had to run to the mountains. Starved and barely conscious, he is rescued by the legendary robber, Rosh, who was rumored to be building an army so mighty, it would crush the invaders and free their people once more. Daniel grows up under Rosh's tutelage, and he sees his fighting skills and strength improve, even while the flames of his hate are fanned higher.

Then one day, through an old acquaintance, Daniel is pulled back to the village life from which he cannot escape - he is the only living relative of a sick younger sister. But he still believes in fighting for freedom and begins to recruit from the young, disillusioned men around him. They believe that their Lord is behind them and take their strength from a passage in their holy writings:

" - God is my strong refuge,
and has made my way safe.
He made my feet like hind's feet,
and set me secure on the heights.
He trains my hand for war,
so that my arms can bend a bow of bronze."

The group takes the Bow of Bronze to heart as only a man on whom the Lord bestows his righteousness and might may bend it.

In the meantime, a new leader is rising in the country. A carpenter speaking in the mountains, the market places, the fishing wharves - reaching to the common people in public places - is rallying people to a new cause. Is he the one that will rouse the people to fight against military oppression?

Disappointment is Daniel's when he learns that the new preacher's message is love and mercy. And yet he is attracted again and again to hear the man, even as his heart denies the message. Daniel is full of questions and doubts. He asks, Was it possible that only love can bend the bow of bronze? In the end, Daniel realizes that it is love and mercy that heals and strengthens.

----
The novel could easily be about anti-Americanism in certain middle eastern nations and yet, Elizabeth George Speare's novel, published in 1961, is about the struggle in Palestine against their Roman conquerors. It is also about a young man, so steeped in hate since boyhood, and his struggle understand what is good for himself and for the people around him. Daniel's service to the renegade Rosh nearly cost him the life of his best friend. His hatred for all Romans nearly killed his only family - his sister.

Of all the Newbery medalists I've read, this one made me the most uncomfortable. I didn't want to be reading what seemed like a classic case of extreme fundamentalism - young men skulking in caves, plotting the downfall of an evil empire, justifying their acts through holy writings, sacrificing themselves in the struggle while at the same time hurting the cause and the people they aim to free.

This is not an easy read - not for the children and certainly not for their teachers nor parents. Teenagers may find it a hard slog, living in Daniel's brain, the hardships of his life, the pain he has suffered as a young men. It may seem that the reward of reading it is in seeing that love does conquer all and is the solution to life's problems. But I would disagree with that. The reward here is in the effort. It is in stepping into the sandals of people who see themselves as oppressed and peek into why they may engage in desperate acts of self-annihilation.

I do not know how a child living in Daniel's place would view this book. Love? Mercy? Let's see you feel that when you're an orphan and you're hungry and your sister is not getting the psychiatric care she needs. But for the children who are lucky enough to be born in the free world, seeing this life through the eyes of another may add to their wisdom and compassion.

" He makes wars cease to the ends of the earth;
he breaks the bow and shatters the spear,
he burns the shields with fire."
Posted by Zoe Brillantes at 11:41 AM 1 comment: 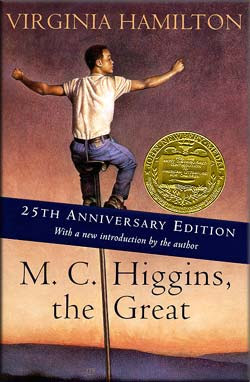 M.C. Higgins didn't seem all that great to me, unfortunately. I just didn't like the guy that much, even if pole-sitting and wearing lettuce leaves stuck in rubber bands around your wrists greeting the sun was interesting. (And why no lettuce leaves on this cover, the one on the book I checked out of the library? Would no kid ever check out a book with a teenager doing something that looks that silly?).

I wanted to like this book by Virginia Hamilton. I thought her descriptions of southern Ohio (or was it West Virginia or northern Kentucky?) were magical, and the characters were complicated. The parts about strip-mining were ominous and probably realistic. The witchy six-fingered Killburn family and their vegetable farm enclave were fascinating. The stuff about the dude coming to collect folk music was fun, and I wished I could hear some of the songs Hamilton described. I loved the historical perspective and the family legends and the whole relationship between the Higgins family and Sarah's Mountain.

But I couldn't get past my initial dislike of M.C. and his father. I didn't like their relationship. I absolutely hated the way M.C. met Lurhetta, and I wasn't too thrilled with most of his later interactions with her. I couldn't believe she was willing to have anything to do with M.C. (spoiler - highlight to read rest of sentence if you don't mind me giving away some of the story) after he cut her with a knife because she was going to bash him in the head after he jumped on her. Ugh.

And there wasn't much of a plot in M.C. Higgins, the Great. I guess I don't mind that so much in some books (like Criss Cross, for instance)....when I like the characters and are curious about their lives and their thoughts. But that didn't work for me here.