I just finished reading When You Reach Me, by Rebecca Stead. It won the Newbery award this year, so I figured it would be worth reading.

I found the book rather disappointing. In the last few pages, all of the bizarre and confusing things that happened through the book are all explained, and everything falls in place but the fact is that until that moment, the book is hard work to get through. I think it's unlikely that my kids, anyway, would persist through to that Ahah! moment, and so would dismiss the book with their usual designation of "boring."

Added to that, the book relies heavily on the reader being familiar with "A Wrinkle in Time", a book which (yes, I know, it's heresy) I can't stand. So, if you're familiar with Wrinkle, and if you liked it, perhaps this will resonate with you. But it really didn't work much for me.

Here's a review that completely disagrees with me.

Some Great Reviews and Links on Newbery Winners

are going up now in Elizabeth Bird's blogging on the "Top 100 Children's Novels". She's updating every day or two, and has done 24 books so far (starting at #100 and counting down), and some of my favorite Newbery winners have already been listed. The covers and video clips she finds are amazing.
Posted by Sandy D. at 10:14 AM 1 comment: 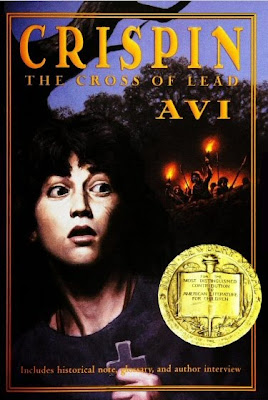 Recently I read Avi’s Newbery winning young adult novel, Crispin: The Cross of Lead. My initial opinion was that it was extremely well-written. I was especially enamored of Avi's descriptions of life in and around a tiny medieval English village. The death and burial of Crispin’s mother, Asta, set the scene for traumatizing upheavals in young Crispin’s life. Before long he was an outcast, his home burnt, his name dishonored. A false accusation sent him running into the woods for safety.

Crispin’s sole possession, a cross of lead, was a common one at that time. His mother wrote something on it but since he had no education, he couldn’t read it. At the age of thirteen, a rather young age for the main character in a young adult novel, Crispin set out as a fugitive to make a life of his own.

Though thirteen is young for the main character in a young adult novel, Crispin: The Cross of Lead should not be classified as middle grade, in my opinion, because of the subject matter, which includes violence. My library has it labeled 'young adult'. Perhaps Avi chose this young age for Crispin because this is intended to be the start of a trilogy, and during subsequent novels he will be growing older.

Toward the end of the novel there were a few events that I couldn’t believe Crispin could be capable of. My suspension of disbelief wavered. I was also distressed by his tendency to disobey -- something that normally would get a child in a lot of trouble! Instead Crispin managed to be a hero each time his disobedience surfaced. This annoyed me, yet I was happy that he wasn’t destroyed by the enemy and that he lived to disobey again.

Compared to other medieval age historical novels on the Newbery list, I thought this one to be one the best. Others I’ve read include The Door in the Wall, which bored me, and Adam of the Road, which is sweet but simplistic compared to today's standards.

Avi’s story-writing talents are well-developed and current. As I’m also a writer of middle grade and young adult novels I cannot help but spot anything that’s not on the current PC list for writers. Older Newbery Medal winners sometimes make me shake my head thinking, “If that book was written now it would never get published,” because it breaks the rules that I, as a modern writer, must live with. Avi’s books, of course are cream of the crop... a good source of novels we more modern writers can learn from.

Crispin: The Cross of Lead kept my interest and did not disappoint. I loved reading it! I also liked Avi's novel, The True Confessions of Charlotte Doyle, which was named a Newbery Honor Book in 1991.